This year I had the opportunity to present at Breaking Development. I’ve attended twice previously and always come away with more ideas and inspiration than I can feasibly find time to implement. 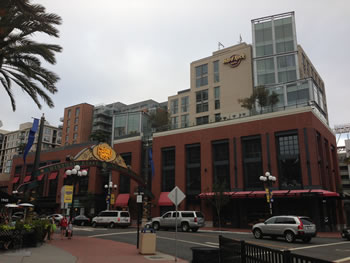 The conference was held in the Hard Rock Hotel in San Diego. Quite a different venue than the bio-domes of past BD conferences.

The title was “Before the @mq: Making the decisons that make a site responsive”. I essentially demoed how some sites deal with images to increase performance. The first example was the BBC’s mobile site and how it loads images for individual articles. The second was West Virginia University’s carousel. I’d like to thank Tom Maslen of the BBC and Dave Olsen of WVU for their feedback and willingness to answer questions. Lastly, I discussed how we took the inital load of ND.edu and reduced it from over 3 MB to under 400 KB.

Links from the slides

I’m not the greatest note-taker by any means, but below are what I have from the other presentations.

One Design to Rule Them All

Visit-Speed: Page Speed is Only the Beginning

Is Flexbox the Future of Layout?

Next Generation Layout on the Web

Pitfalls & Triumphs of the Cross-Screen Experience

How to Build The Right Thing

Practical UX for Mobile: A Future Friendly Approach to Communicating Your Ideas