Back when I first started with Rails, I noticed there were a lot of times I just needed to know the Ruby/Rails equivalent of some PHP function. It started me thinking that it would be great to have a resource similar to PHP.net where you could just append the function name to the end of a url, and get some relevant Ruby/Rails examples. Well, somebody beat me to it.

Digital Media Minute has a great bit of terminal magic that allows you to create invisible spacers in the Leopard dock. You can create as many as you like, drag them around, or if you created too many, drag them off.

Only added mine 10 minutes ago and I’m already quite fond.

One of the first complaints many voiced when Leopard was released was the transparent menu bar. I am well aware that there are a couple of applications out there that will fix this, but there’s also a rather simple way if you have access to an image editor.

When Apple first released the iPod in 2001 I thought, “wow, those are pretty cool; I’d like to get one of those someday”. But as the years went on, and the models changed, I never did. For one, I’m cheap. Second, I’m picky. I never needed the vast storage of the nice models, and frankly didn’t want to pay the hefty price tag (see? cheap.). Well what about the shuffle you may ask… and I would refer you back to the picky. If I was going to get an iPod, I wanted to get one that I would enjoy. And that required an actual interface. When the first generation Nano’s arrived, I thought ‘aha, here we go’. But alas, it never happened (back to the cheap). Fast forward to 2007. I knew Apple was about to announce new iPod’s in the fall, so I figured now was my chance. I could get the gen 2 Nano for cheap after they announce the Gen 3. Perfect. I’ll finally take the plunge.

It’s been my primary project, and the focus of our entire department since the day I started at Notre Dame. I give thee the new ND.edu. 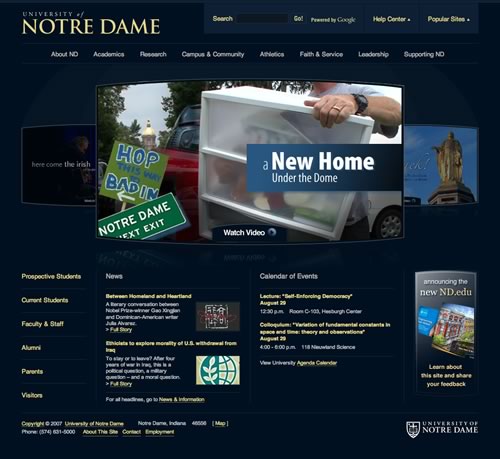 Ok, so let’s say you’re doing image replacement on an unordered list. Since we’re all good boys and girls here, we include the actual text inside the link tag and spin it off the left of the screen with text-indent. Well if you’re a Firefox user (or test with it), then you may recall seeing the border generated around the navigation and going off the left of the screen (see below).

Ok, change of plans everybody. For those of you who read my last post (I think I’ll go for a walk outside now), you may remember I had a list of items I wanted to accomplish, and that I had decided they were pretty much going to have to wait for the fluffy white of Michigan to appear before I could fit them in.

Do you have a laundry list of tech goals? I sure do. It goes something like this: